Islamic Threats Form A Serious Backdrop for 2016 in Europe!

Something is cooking among muslims in Europe - for sure! This weekend we have evangelized among several muslims in the Oslo area. They all seem scared, wary, and aware of "something" that is going to happen - even in the city of Oslo. The same reports are emerging in various metropolises of Europe: Paris, Brussels, Hannover, München ++. The list is getting longer....Now is the time to stay alert and focused, European Apostolic Leaders! Church arise! Apostles & prophets arise! 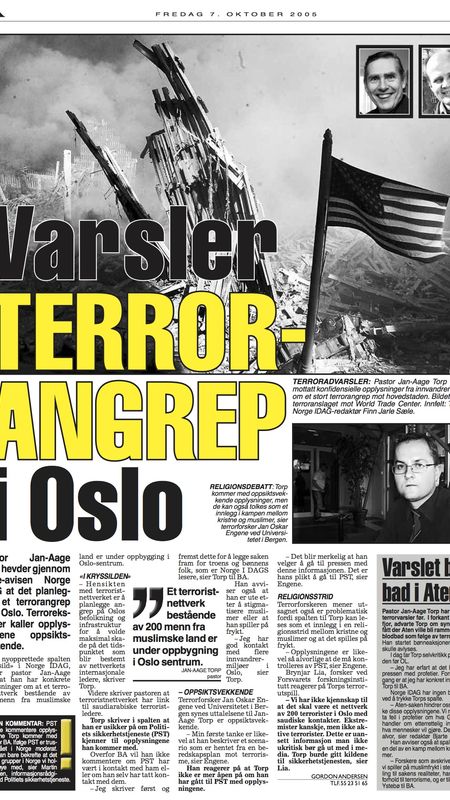 On October 7th, 2005, a Norwegian tabloid newspaper picked up my warnings against imminent terrorist threats against Oslo, and made a sensational story. Communicating this is never easy, but somehow it has to happen. Don´t despise prophecy!I have for at least 15 years been involved in apostolic & prophetic acts in Europe and internationally that have had different outcomes. I warned against terror during the Olympics in Athens 2004, and it didn´t happen. However, several informed specialists in security showed me conslusive evidence that specific terror plans "mysteriously" did not happen. Was it because of prayer and obedience to speak?

Speaking "prophetic warnings" is risky. Is it just to create dramatic attention to the Biblical message, or is it really necessary? I appreciate the wise caution.

Nowadays, most "prophetic warnings" do not seem to come from the Church, nor from the circle of apostles & prophets. We all seem to be happy if we are viewed as "Mr. & Mrs. Positive". It seems that we don´t even "know" of the crises until after they have happened. (In Norway, a brother wrote a book about "the July 22nd prophecy", referring to the slaughter in our nation in 2011 of 77 people. The problem with his book is that it was written 3-4 years after the terrorist acts. That is not prophecy!)

The real "prophets" of our day seem to be scientists, politicians, and media spokesmen. The Church, and the apostles & prophets, are silent about what matters, and major on "NICE"....

Let me also underscore that we do not need to create a buzz around ourselves. If someone who does a better job than us is given the responsibility to sound the alarm - then that is perfect....

However, we must not forfeit our mandate and role in Europe by being "NICE". There are imminent threats to our cities and nations!

When the Church in Antioch (Acts 13++) initiatied by the Holy Spirit the Kingdom advancement to the Middle East and Europe, that happened in the context of prayer & fasting, seeking the Lord´s presence, and listening to the words of prophets & teachers. Acts 13 was preceded by serious prophetic warnings as well.

As European Apostolic Leaders we need to be in this modus as 2016 has started. Kingdom advancement and prophetic warnings go together.

And we need to lead by example: Serve our cities and nations by bringing together prayer warriors and the Church at large in targeted prayer for our cities and nations. It is common to have sudden prayer vigils when the crisis has already happened. That is commendable and good. However, we need maturity and wisdom so we come together to pray to STOP the atrocities, before they happen! That is APOSTOLIC PRAYER that is not emotionally driven, but prophetically influenced.

Several apostles wrote to me in November 2015 and shared their agony over how some apostolic leaders were focusing more on "church politics" and power struggles than on serving our continent, even while terrorist atrocities were happening. I agree. Let us make sure that does not happen again in the future.