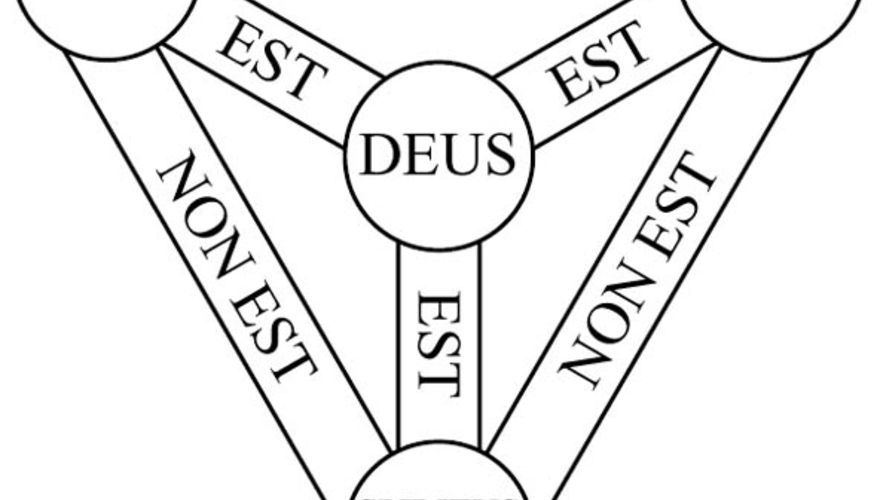 The Shield of the Trinity, informed by the Nicene Creed and the Athanasian Creed.As a kid, I learned to read, know, and love the Bible.

One of the clear teachings that I personally derived from God´s infallible Word, is that God is ONE, and God is simultaneously THREE. Frankly, a simple reading of the 66 books of the Bible proves that God is Three in One, Three and One! It defies “logic”, but the whole Biblical revelation does exactly that! I learned that this doctrine is significant because it describes the wholesomeness, magnificence, and magnitude of God. The reality that God is Three Persons portrays His majestic nature of grace, mercy, power, might, holiness, creativity, healing, restoration, love, affection, adoration…. He is both truly divine and human. All Three Persons of the Godhead have always been, they are now, and they will always be! They are omniscient, omnipresent, omnipotent.

The Nicene Creed (325 AD) established this also, by the way. I am happy to belong to the European Coalition of Apostolic Leaders (ECAL) which clearly affirms Trinitarianism. The worldwide Pentecostal movement, spearheaded by Assemblies of God (AG USA) and Redeemed Christian Church of God (RCCG Nigeria), affirms Trinitarianism, as we also do in Oslochurch, which I pastor.

I grew up in Asia and had a lot of muslim friends. One of the clearest differences between us was about who God is. For them, it was an impossibility that God could be Three. For my muslim friends, “Allah” could e.g. never be perceived as love….

As a teenager, I would also meet Jehova´s Witnesses, who had constructed a non-Biblical distinctiveness which made them vehemently opposed to Biblical Trinitarianism. Again, it was easy to perceive that their relationship with “Jehova” was so limited and tainted by their doctrine….

To my dismay, as a teenager, I met tongues-talking believers who labelled themselves “Oneness”, “United Pentecostal”, and who were just as venemous as the above-mentioned groups in their resistance to Trinitarianism.

As a pastor through 31 years, I have met several of these aberrations. I have learned to treat them lightly. I am sure that several of these “Oneness” people are serious in their quest for truth, but in some instances, I have found that some are only looking for “a cause”…. I don´t believe that such erratic teachings warrant much attention.

I have been saddened through the years when “Oneness” adherents, even in Europe, have negated true New Testament baptism, and demanded that born again believers who join their churches must be “re-baptized”, only in the Name of Jesus. That is sectarianism, and definitely incompatible with Holy Scripture.

To counter this demonic divisiveness, I learned in 1983 from one of my mentors, Pastor Tom Erlandsen (who died in 2010), to administrate baptism with this in mind. Instead of saying: “I baptize you in the Name of the Father, the Son, and the Holy Spirit”, I will add the phrase “unto Christ”. Whether I baptize in Norway, Thailand, India, Spain, Zambia, Uganda, Israel or any other place where I have conducted baptism, I will therefore say with great boldness:

“I baptize you, unto Christ, in the Name of the Father, the Son, and the Holy Spirit!”

So if a bewildered brother or sister comes to me, confused by “Oneness” zealots, I can assure them that they have already been properly baptized by their own profession of faith!

Some anti-Trinitarianists claim that the doctrine of the Trinity is not in the Bible. My question is: Which Bible are you reading? I am not even confused. The term “Trinity” is never used in Holy Scripture, but the reality of the Three Persons of the Godhead is taught loud and clear. Baptism is administrated in the New Testament both in the Name of Jesus and in the Name of the Father, the Son, and the Holy Spirit.

The pentecostal version of anti-Trinitarianism came around 1913, and I guess it will be around still for some time. Its proponents are zealots for this cause.

As for me, I choose to build upon the simple teaching of the Bible. Christianity is Trinitarian!